One of the most sought after destinations by travelers, the American territory with its infinite attractions and landscape diversity welcomes large numbers of tourists every year. From the big cities with the characteristic skyscrapers to the immense landscapes of the Grand Canyon, the United States is a must see at least once in a lifetime!

Passport, visa and length of stay
To avoid any problems when you arrive in the United States, check to make sure you have a valid passport.
The need for a visa and its duration depends on your nationality.

There are no mandatory vaccinations to visit the United States.
Before leaving, it is advisable to take out good medical insurance so as not to incur high medical or hospital costs.

US population: approximately 329.311,764
Language: English is the official language of the country

Religion: Most of the population is Protestant.

Credit cards
Visa, Mastercard, Amercan Express are the most used and therefore accepted credit cards throughout the country.
Before leaving, we recommend that you consult with your bank to activate withdrawals and use your credit card in the United States.

Climate: Having a very large territory, the climatic zones are also very different in the United States. Thereeast coast (for example: New York) is characterized by the continental climate with hot summers and cold and snowy winters. Moving towards the south of the country instead we notice the rise in temperatures and therefore a subtropical climate, here in fact there are the destinations sought after by tourists such as Florida or California.
The climatic differences are to be evaluated while organizing your itinerary, therefore it is advisable to check the temperatures and climatic conditions before leaving to discover the States!.

There is little to say: the United States of America is the kingdom of hamburgers and pancakes! A real paradise for those who have seen classic American films for years where everyday food is just that! Coffee to take away and a chocolate muffin, so the morning starts in the big cities! But obviously American cuisine is not just that. Having different cultural influences, the cuisine is also very varied: from Mexican cuisine, passing from Hawaiian cuisine to Creole cuisine ... here you are spoiled for choice!

If you are planning a trip to the United States that is a short stay or a traveling trip between large cities and natural parks, we recommend checking the availability of the accommodation facilities. Being a popular destination throughout the year, the rates for accommodation are usually higher than what could be found, for example, in Europe in the same level facilities.
The large metropolises offer a lot of choice of different structures: simple or luxury hotels, apartments with breathtaking views or simple hostels for young "backpakers" and not only.
In the areas of large national parks, there are few medium-sized structures that offer travelers the standard services and then continue the itinerant journey.
A true paradise of proposed accommodations awaits the traveler for the choice of resorts in the south of the country. Here reign relaxation and fun among the giant pools in full American style with the bar counter immersed in the water at the beach parties, fun is guaranteed!

Under the banner of the American dream, more and more travelers choose the United States forexplore the great metropolises and the wild nature offered by the huge territory! Impossible to mention all the places to visit, but here are some ideas on the most sought after and interesting destinations.

Most visited city and symbol of the United States. "The Big Apple" with its charm attracts millions of tourists every year. With its symbolic places such as the Statue of Liberty which houses a museum telling the great history of immigration, it is a "must see" point of the city. Thanks to cinema, this city has to be explored: Manhattan, Central Park, Fifth Avenue, Empire State Building, Soho District are points that every visitor must see! Passing through the great metropolis between its skyscrapers and the frenetic air, one cannot help but daydream!

One of the most stimulating cities in the country. Los Angeles is known worldwide for its attractions and places to visit. With its Venice Beach it welcomes visitors with its charm with a fully American style. The inevitable Hollywood Boulevard, where you mainly look under your feet! Its pavement is full of the footprints of the best-known show stars in the world. For film lovers, a look at Universal Studios and the notorious Beverly Hills neighborhood is recommended, where you can feel like a real star.

Fascinating and extravagant, San Francisco is a pearl to be explored for those arriving in California. With its Golden Gate, the symbolic bridge of the city manages to kidnap the visitor with its grandeur and grandeur. The city with its historic trams that travel the inclined streets gives unique emotions! For the more curious, we recommend the inevitable visit to Alcatraz prison, the famous home of the best known and most dangerous criminals in history. Being un real attraction, it is in great demand, it is advisable to book the visit well in advance.

Famous all over the world for gambling, it is a city that knows no timetables and never sleeps! With its unique casinos and luxury hotels such as Bellagio Hotel, known for its magical fountain show, it enchants visitors with its water features; or the magnificent Ceasar Palace with its magnificent Roman-style buildings makes you speechless! For those who also want to explore the area, a visit to the Red Rock Canyon is recommended, to discover the typical desert of the area! 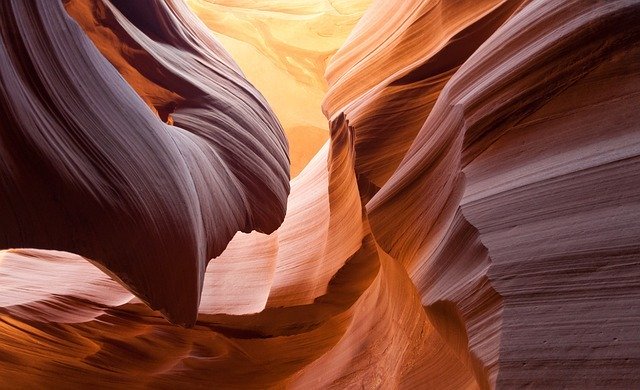 National parks cannot be missing from our guide! The priceless pride of Americans, theseimmense areas of unmistakable landscapes welcome its numerous visitors with open arms. One of the best known is certainly the Grand Canyon, a huge gorge carved by the Colorado River. It is followed by the famous Antelope Canyon which is divided in turn into "upper" and "lower" for the two exploration areas: in fact, you can visit both the upper part to enjoy the breathtaking panoramic view or choose the lower "lower" part to immerse yourself in the deepest excavations of the Canyon which is certainly a unique experience that will remain etched in memory.